I had a lovely few days away visiting family for Christmas. Now that we’re in the funny bit between Christmas and New Year, I can finally grab a few minutes to share my #sewingsanta gift(s)!

Well, my package arrived a week or so before Christmas and it took a lot of motivation to leave it unopened until the big day! It was a great big box, FAR bigger than the little package my giftee received! OK, size doesn’t matter, but… it kind of does, doesn’t it?!

But I managed to hold myself back and opened it after breakfast on Christmas Day, after the excitement of Father Christmas had died down (as much as it was going to with two young girls!) 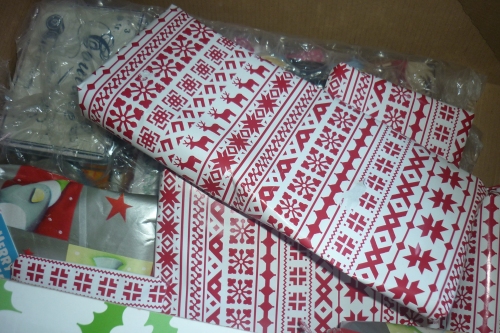 When I opened the box I was confronted by loads of goodies, and a big red handmade (of course) card which told me that my Sewing Santa gifter was Sheila at Sewchet. (I’m so going to steal the design idea on the card!!) 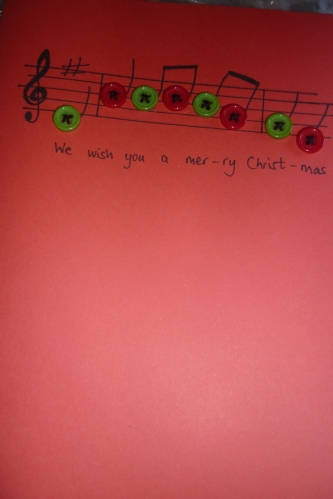 There was even a little sachet of teabags, which was a lovely touch, and tasted just like Christmas! 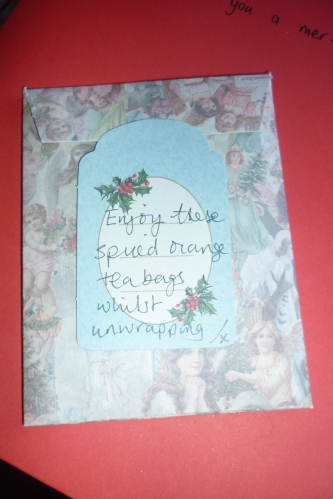 I had an inkling that the box was from the lovely Sheila, because I read her blog regularly and she did mention that she was posting a large box out, which would arrive the following day at the lucky recipient’s house… So when I came home to find a big box on my DOORSTEP (meaning outside!!) that very day, I did silently squeal with delight. Half because nobody had pinched it!

So, without further ado, I’d better share my very lovely and thoughtful gifts with you all. Here are all the ‘bought’ things that I received: 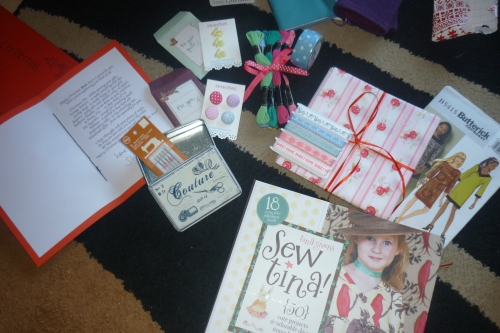 Just look at it all! Everything is so thoughtful and I don’t know what I like best! I love how she thought I will need some ballpoint needles to tackle knits, and the embroidery threads to try something new! Yes, I must do some embroidery! There’s also a nice book with lots of projects for girls; a vintage pattern [I will probably make the middle view]; some pretty fat quarters; sweet ribbons [you can never have too many]; washi tape [I’ve never used it!!] and cute buttons [again you can never have too many, and did she know my youngest loves bunnies?!] Oh, and a dear little tin to put my little bits in!

And, as if that wasn’t enough, I also received so many beautiful handmade gifts, which was a real bonus! I was so happy and overwhelmed by the time and effort that went into these gifts. 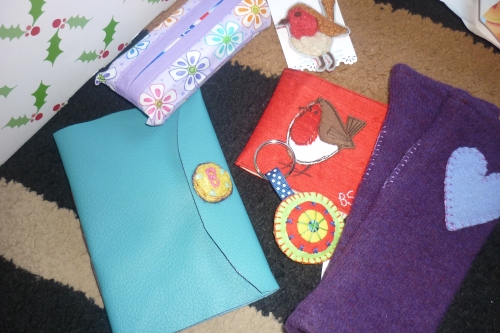 I put the beautiful robin brooch on my dress straight away; it’s so sweet. I don’t even know how Sheila made it but it’s totally beyond my skillset! The notepad and needle case are embroidered with my initials; another thoughtful touch. I love all the different kinds of paper in the notepad, and the needle case is beautiful. The keyring is on my keys and looks fab. The fingerless gloves are really warm; I definitely need them in this weather! And the tissue case has had a lot of use already. Aren’t I lucky? 🙂 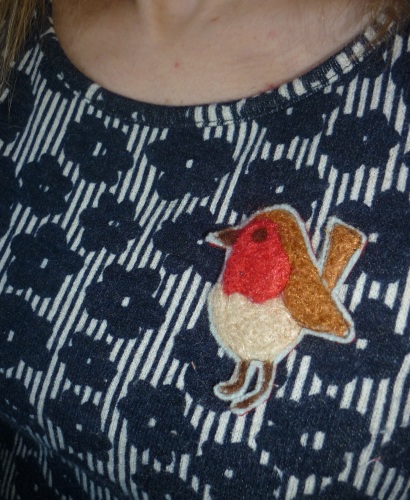 That’s not even all of it, actually. There was also a cute little stocking decoration too, but my eldest swiftly grabbed it and hung it on the tree before I even picked up my camera!

I was really flattered that Sheila had even thought to give something to my two girls as well. I didn’t sign up for that! THANK YOU, SHEILA!!

She gave both girls these awesome hats, made out of recycled t-shirts! They are so soft and comfy. And very cleverly made. I’m so grateful. Ooh, and if you look to the right of my eldest’s shoulder you will see the little stocking hanging on the tree! 🙂 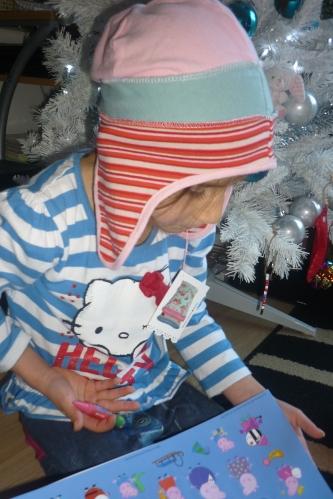 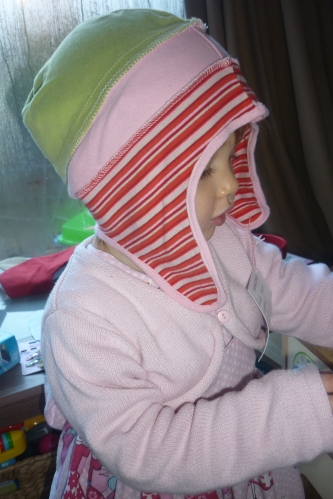 If you don’t follow Sewchet then DO IT because she is amazing!!!

She even devised a little poem to go with the gifts, which was so clever! I started reading it then stopped and opened the presents first so as not to spoil the surprise! 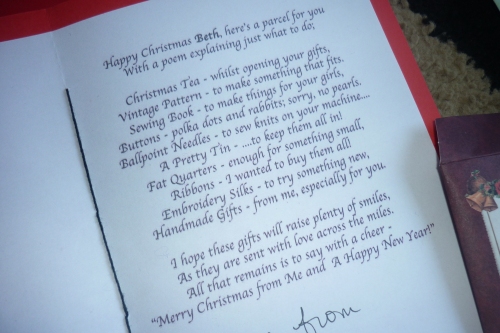 So all in all I think I did rather well and am very glad that I joined in with Sewing Santa (hosted by Lisa @ Stitched up from the Start). Bring on Christmas 2015!! I hope my recipient enjoyed her parcel, too. She did get one handmade thing (a cinnamon stick tree), but the majority of the gift was focused around what I understand to be her interests, and it was mostly fabric! 🙂

I should just finish by saying sorry for the low quality of photos… I’m sure you can understand that a lot was going on at the same time so my photography was rather rushed to say the least!!

I really enjoy reading your comments; please do share your thoughts! Cancel reply 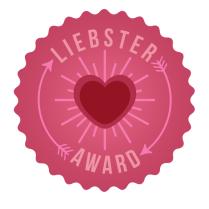 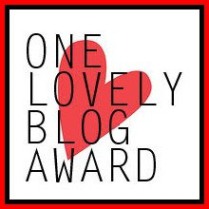 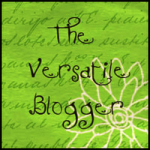 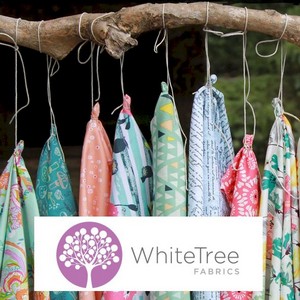